Skip to content
Adelaide recently played host to the National 2014 Defence & Industry Conference, with high profile attendees from around Australia representing all tiers of state and federal as well as representatives from all tiers of the Defence Industry Sector.

Cadgile was one of a select group of South Australian defence industry representatives provided with a dedicated individual trade “pod” to show case the depth of talent and expertise in this key S.A.  industry.  Cadgile was represented on the stand by the National Sales Manager,  Mark Nelson and Managing Director, Gary McRae.

During the conference, the State Minister for Defence Industries the Hon Martin Hamilton Smith along with Leesa Vlahos, the Parliamentary Sectary to the Premier, and Mr Chris Burns, Defence Teaming Centre Chief Executive Officer went and met with the SA Industry contingent, stopping to spend quite some time chatting to Cadgile MD Gary McRae to gain first-hand knowledge of the importance of this sector to the state to SME’s such as Cadgile. 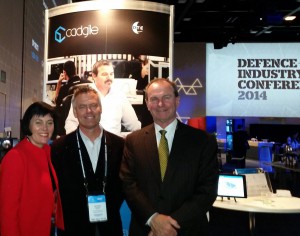